With the same beasty spirit and sharp captivating looks of an angel, the MV Agusta F3 800 Rosso is ready to rule roads again, and this time with an updated engine, engaging electronics and riding feedback that remains exquisite.

The F3 badge goes all the way back to 2011, and it was the House of Schiano’s attempt to enter the middleweight supersport machine. This was followed by a limited edition F3 Oro, and only 200 units were produced. With the introduction of the F3 800, the Rosso lineup is complete with the Brutale, Dragster, and Turismo Veloce, by the side.

At SHiFTUP.Club, the recently launched Turismo Veloce has already been declared as the most beautiful looking ADV. The F3 Rosso just established itself as the most exotic bike ever. With a design that is inspired by the bigger MV Agusta F4, the most beautiful looking bike; the MV Agusta F3 800 Rosso looks gorgeous in its Agostini Red Colour. What makes it more exotic is the beast-spirited, black-colored engine complemented by a sharp rectangular triple exhaust with a new black-colored shield.

The 2021 MV Agusta F3 800 Rosso gets the same engine from its older generation but with certain noticeable updates. The F3 800 Rosso is powered by an inline 3-cylinder 798cc engine accompanied by a counter-rotating crankshaft producing 147hp at 13,000rpm and 88nm of torque 10,100rpm. The engine is compliant with Euro 5/BS6 emission norms and produces 1hp lesser than the older bike. Despite delivering similar power, the engine now gets major updates in its internal components. The new DLC (Diamond-Like Carbon) treatment reduces the internal engine friction. The F3 800 Rosso engine also gets new injectors with improved injection pressure, titanium valves, a new muffler, and a modified exhaust for improved power and torque ratio.

MV Agusta claims that the ECU (Engine Control Unit) gets a software update for improved throttle response and refinement and a bi-directional radiator that improves the cooling function. The bike also gets IMU (Inertial Measurement Unit) enabled electronics with updated lift control or wheelie control system that enables the motorcycle to perform a wheelie on demand without ruining the joy of riding. Lastly, the F3 800 Rosso also gets departure control, cruise control, and a new clutch basket with an updated bi-directional quickshifter for softer and precise shifts thus reducing the off-throttle time.

The MV Agusta F3 800 Rosso gets a new 5.5-inch TFT instrument display that enables connectivity with the MV Ride App and offers turn-by-turn navigation on the display. The display controls and the handle-bar-mounted launch controls are the latest add-ons.

The motorcycle gets aluminum single-sided swingarm pivots thus increasing the torsional and longitudinal stiffness resulting in better stability and a much more balanced ride. The suspension setup on the F3 800 Rosso remains the same with both ends fully adjustable Marzocchi USD forks up front and Sachs mono-shock at the rear. 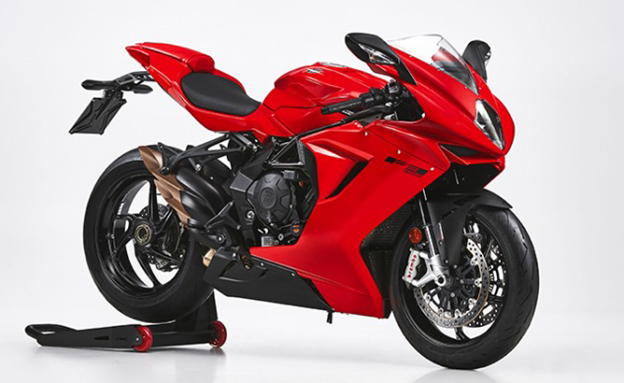 With all the updated features and specifications, the 2021 MV Agusta F3 800 Rosso has become the most accessible sports bike from this Italian manufacturer. Although the prices for the motorcycle have not yet been revealed by the manufacturer, the 2021 MV Agusta F3 800 Rosso is expected to be priced a bit higher than the older F3 800. MV Agusta exited the Indian market with a terminated collaboration with the Kinetic Motoroyale (Indian retailing partner for MV Agusta), however, the company has plans to re-enter the world’s biggest motorcycle market- India.

ShiftUp has been obsessed with Augusta’s for quite some time. Starting with the 750 Sport America, this classic bike is the ‘The Classic Bike’ with its revolutionary DOHC air-cooled inline-four with its 70 hp power output, making it the most exciting bike back in its days. This love is also found in the Superveloce that has been declared as art on two wheels. The Superveloce incorporates all the good design language from Augusta’s past, and it’s fast too.

But the proper special edition MV Agusta that stands out has to be the F4 Senna. This unique art was a proper homage to racing’s greatest personality Mr. Ayrton Senna. A true body of art of wheels, the F4 Senna still remains the best-looking MV Augusta.

The current line-up of MV Agusta comprises six bikes. The line-up starts with the MVAugusta Brutale – this naked bike is the cheapest MVAugusta available. The 2021 MV Agusta Brutale is available in four trims – Rosso, RR, RR SCS, and 1000 RR.

The Brutale is followed by the Dragster, the meaner version of the Brutale. The Dragster is also available in four variants – Rosso, RR, RR SCS, and the RC SCS.

Both the F3 and the Superveloce are at the top of the pyramid of Supersports bikes. The Veloce is more of an exotic build (as was mentioned before), and it is available in three models – 800, S, and Alpine. The F3 on the other hand has an exclusive track model that goes by the name 800RC.

And last but not the least, MVAugusta has one of the most beautiful-looking ADV available. The Turismo Veloce is available in four models – Rosso, Lusso, Lusso SC, and RC SCS. The latter are better equipped to do the long-distance, with ease.